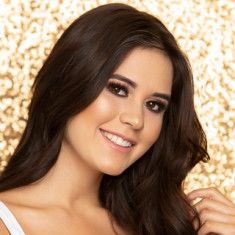 Rafaella Enderica was born in Guayaquil Ecuador and left to Canada when she was just three years old. She spent some time in Toronto and ultimately her and her family moved to Port Coquitlam, British Columbia where she was raised. She graduated from Pinetree Secondary on the Honors program, she is currently 20 years old studying at Simon Fraser University majoring in International Studies where she hopes to later go to law school and start her own not-for-profit organization to help immigrants and refugees. Rafaella was an avid debater in school, placing in many debate tournaments provincially as well as nationally.

She created and ran the debate club at her high school along with her debate partner. Recently she stayed abroad in Ecuador for six months where she worked at a bank and took courses at a local college. While in Guayaquil she had the opportunity to work with a local charity and build a home for a family in need of shelter. Her parents have always led by example, explaining that whatever you may choose to do, you do it to your fullest capabilities.

In her spare time Rafaella loves to read novels on politics and watch the news, she also enjoys sailing with her family in the summer, and spending time outdoors like going for hikes or long walks. She found that moving to a new country took a toll on her own family, admitting that it occasionally felt very lonely especially during the holiday season. She hopes to be able to change that for new immigrants and refugees. She wants to help them on their journey to a new home while still maintaining their own cultures and values.

Rafaella is extremely comfortable with public speaking and developing her own opinion on matters; while still maintaining open minded and admitting when she may be wrong. Rafaella is a proud Canadian who hopes to honour her country by representing them on the international stage at Miss Universe.

Which School Did Rafaella Enderica Attend?