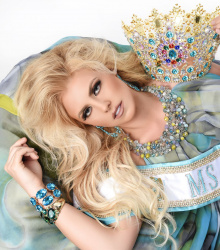 Hailing from Texas, Ms. Earth Rachel Fikes is a former Army Captain, with tours to Iraq and Afghanistan under her belt.

While deployed, she completed her first novel, Bunker of Absolution. Rachel has a Bachelor of Science in Agricultural Journalism from Texas A&M University, a Master of Arts in English and Creative Writing from Southern New Hampshire University and is currently pursuing a PhD in Critical and Creative Writing at Bangor University.

After being crowned Ms. Texas United States in April 2014, she won the first season of The Fashion Hero, a reality TV show dedicated to breaking the modeling industry’s harsh standards on beauty. She's completed a couple marathons, half ironman, and is a certified Scuba diver. Rachel is an advocate for RAINN (Rape Abuse Incest National Network) helping over 250 survivors of sexual assault since 2014. She’s also an ambassador for Soles4Souls, an organization committed to fighting world poverty. During her reign, her goal is to collect 25,000 pairs of shoes; she's reached 3,000 pairs so far. Rachel hopes to be an English professor and an established writer. She currently lives in Ruby, New York where she is the Executive Director of the Mrs. & Ms. Earth Organization and works for Education First teaching English as a foreign language.

Which School Did Rachel Fikes Attend?