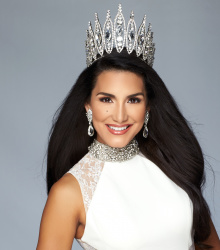 Mrs. International - Priscilla Pruitt has had the joy of sharing the past 12 years with her “Mr. International” Sean Pruitt. In marrying Sean, she gained a beautiful daughter. Together they've had three amazing children, and they've also adopted two gorgeous girls...Proudly making them a family of EIGHT!

Having been married for over a decade, they've learned a thing or two, and have endured their share of obstacles. Now they are blessed to walk alongside couples, counseling them in the power of unconditional love.

She considers herself privileged to have been born in this amazing country, a gift she does not take for granted. It is that gift, her love for her relatives in Cuba, combined with her passion and love for children; that inspired her family to build three orphanages in Honduras, partnering with Impact Ministries International.

As a minister, she has the opportunity to travel all over the US speaking, teaching and empowering others. Mrs. International is also bi-lingual, and that has enabled her to speak to those in the Spanish community, as well as in other countries.

Four years ago, they chose to move to Wyoming, leaving all of their friends, family, and everything behind, in hopes to change the suicide rate in the-then suicide capitol.

They decided to start by giving local kids an opportunity to have a safe, nurturing environment, and began a weekly youth group with over a hundred kids that they feed and entertain, personally covering one-hundred percent of the cost. This has opened the door for them to mentor youth who have either attempted or contemplated suicide.

As the Global Ambassador and International Spokesperson for Safe Haven Baby Boxes, Mrs. International is in charge of all international affairs, every email, phone call, ANYTHING to do with planting baby boxes internationally. She is working on a daily basis to rescue newborn babies from abandonment.

She also works alongside the American Heart Association's - Go Red For Women as one of their National Ambassadors. As their Ambassador, she has had the privilege of being the keynote speaker at one of their luncheons, teaching Zumba on stage in front of 50,000 at the Dallas Heart Walk and conducting TV interviews. In her role as Mrs. International, she has been traveling throughout the US, educating about the number one killer in women- heart disease.