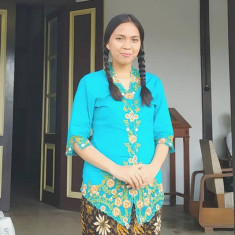 She is Indonesian, she was born and raised in East Kalimantan (Borneo), until she finished her study at college there. Now, she is starting her career as Management Trainee in one of state company in Indonesia, which now she is placed in Jakarta.

On 2012, when she was 17 years old after graduating from senior high school, she joined beauty pageant at her region and praise God, she won as Putri Pariwisata Kutai Timur 2012, and 5 months after that she competed to higher level at her province, thank God she won the title Putri Pariwisata Kalimantan Timur 2012. On the next year, 2013, when she's 18, she competed to national level in Pemilihan Putri Pariwisata Indonesia 2013, but she was stopped just as finalist. Now, to embrace 2020, she thinks this is her last chance for her to join the biggest beauty pageant platform in Indonesia - that is Puteri Indonesia (which will be chose the 3 representatives : Miss Universe Indonesia, Miss International Indonesia, and Miss Supranational Indonesia). She wants to give her second chance for her self to join the national beauty pageant :) Because, in her opinion, beauty pageant is more than gowns and heels, or crown and sash, but it's about you challenge your self to be your best as role model in every way of your thoughts, words, and even actions. Be your self, be your best! -Sola Fide

Very sensitive with cold and dust.