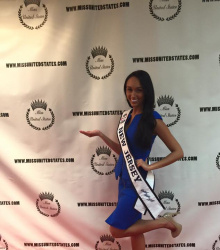 “My first time competing in National American Miss was in 2012. I decided to participate in the pageant because I had received a letter in the mail and wanted more than anything to try something new and exciting. After my first pageant weekend I knew NAM was for me. I came back this year and placed 1st at my state pageant which was such an honor then I was blessed with the opportunity of winning the National All American Miss Teen title!” Phoebe said in an interview with Tiffany Reilly, a staff member at National American Miss.

The titleholder works closely with numerous charities such as Big Brother Big Sister, National Diabetes Foundation, Restore the Shore and the Special Olympics. “I love participating in community service. I spend time helping numerous charities which are very dear to my heart. I hope I am a role model for other young teens and inspire them to help out as much as possible,” Yankowski said.

Phoebe said that pageants have taught her that she is not this shy person she always thought she was. “Because of National American Miss I can stand up and talk to large crowds of people, I can carry myself gracefully, and I can be comfortable in an interview setting and answer questions about myself and things I am passionate about. Ultimately pageants have taught me that if I have a dream, I should chase it because anything is possible if you believe in yourself.”

Phoebe was Pageant Planet's first ever Titleholder of the Day