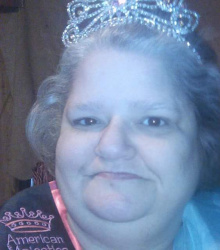 I'm a Native American decent from Oklahoma City, OK. I was born, raised and currently reside here. I've been married to my best friend Gregory for 30 years and we have five children and two grandchildren. I enjoy watching and competing in pageants as long as I can remember. I won my first pageant in 2004. I have four pageants won so far, both stage and online. I won everything from a local mini grand supreme title to a national Mrs. title! I have several disabilities in my body. I've been living with type 1 diabetes since 2007 and rheumatoid arthritis since 2014. That is what encouraged me to continue in pageants, even as a board member. I am getting ready to work in the Pageant of Swans and Sparrows as Lifetime Swan of Philanthropy. I hope to be a role model to those with disabilities. I'm getting ready to go to Columbus, OH for American Majestics Pageant as Ms. Diversity Oklahoma. My platform is Autoimmune Awareness. Living with two autoimmune diseases has helped me to look further into other kinds of autoimmune diseases and to get involved in JDRF, Arthritis Foundation and American Autoimmune Related Diseases Association. In March I am getting ready to do a walk to raise awareness and money to help autoimmune diseases. I maybe fat, short, disabled and lost teeth, but that does not keep me from competing in pageants!

Which School Did Pebbles A. Smith Attend?