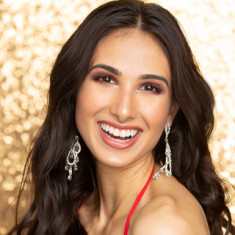 Paris is pursuing an honors degree in the field of Biological Sciences with a focus on Genetics. Currently finishing her second year, she has an interest in becoming a Physician, which had initially sparked because of her older brother who was born with a rare genetic syndrome called Cornelia De Lange. Paris is an avid learner, who is consistently interested in discovering what has yet to be discovered. She also volunteers at a local hospital where she enjoys spending time to help care for the elderly patients by providing comfort and a listening ear.

Paris has worked tremendously hard over the past fifteen years to attain and maintain a second-degree, martial arts black belt in Tae Kwon Do. As a result of her hard work and abilities she was invited to join a high-performance team representing Manitoba, and to travel to different countries and compete at an International level. Through martial arts she has learned the value of discipline and many other important qualities such as respect for others and herself, commitment, and confidence. The values she has inherited from this commitment has attributed to success in all aspects of her life. Paris was elected head of the student body in her senior high school year where she was able to voice her opinions, speak on behalf of the students for changes within the school and learn valuable leadership skills that are still with her today.

As a recipient of the Duke of Edinburgh award, Paris has a keen interest in exploring new places and gaining a better understanding of herself and the cultures around her. While on the wildness retreat, Paris gained an interest in exploring and appreciating the world and nature around her. Meeting new people, bonding over campfires and hiking, Paris has developed a desire to continue seeking new adventures. Paris is an avid “foodie” and in her spare time; she loves following Gordon Ramsay tutorials and cooking up new creations. Her specialty in the kitchen is cooking Svalka, a traditional Slovenian delicacy with her grandmother.

Paris hopes to be a role model for younger girls, as she advocates for them working towards jobs in the STEM field. She is passionate about being an activist in order to encourage confidence and independence. She is a proud Winnipegger and has grown up loving the brash winters and beautiful beaches and lakes in the summers. She is excited to share her journey throughout the Miss Universe Canada competition and is excited to represent Canada on the global stage.