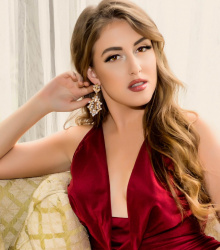 I started competing in pageantry when I was 19 years old. I was trying to find a sense of self and felt that I needed to gain more confidence as I was heading into adulthood. I managed to make the state finals for Miss Universe Australia and from there I really felt that I was in my element as I have been competing ever since. I juggle special needs teaching, sports and my general fundraising along with pageantry, however I thrive with a busy lifestyle and it only makes me more determined to work harder. My aim is to inspire young women to be anything that they want to be and to assure them that NOTHING in life is off limits.

We've heard of so many motivating stories of beauty queens who faced hardships in their pursuit of the crown. Whether it be a personal adversity or an emotional or physical hindrance, they all showed strength to fight and chase their dreams. In today’s news, we feature an inspiring story of a pageant finalist who has proven that true beauty is courage that radiates magnificence within. (Read: Your Reason and Vision To Win A Pageant)

Olivia Raffaele was diagnosed with Bell's palsy one week before the Miss Galaxy Australia National Finals in 2016. Photo: livraffaele

Olivia Raffaele, the beauty from Carindale, Australia, competed in last year’s Miss Galaxy Australia Pageant with Bell’s palsy. One week before the national finals, Olivia woke up to a numbing face on the left. The doctor diagnosed it to be Bell’s palsy, a condition where part of the face is temporarily paralyzed and causes it to droop. Contrary to medical advice that the symptoms will not worsen, she lost the function of her one eye and her speech garbled because of the paralysis.

Having your face paralyzed right before you compete for the national finals is not exactly the plan you had in mind after all the hard work in getting to where you are now, Olivia said. She was a state finalist in Miss Universe Australia in 2014 and competed in Miss Global Australia in 2015, winning the Best in Interview award. Last year was her second time to participate in Miss Galaxy Australia. It was a surreal feeling to suddenly drop to zero self-esteem after being on top of it all.

After countless tears behind doors, self-pity and embarrassment due to her condition, Liv finally woke up to the day when she realized what had happened to her and accepted that there was nothing she could do to make it go away. The only thing left to do was to gather up her courage and compete. So she did, and never regretted it one bit. (Read: How to Keep Your Pageant Confidence High During Competition Week)

There were times all throughout the competition when she found her condition to be a hindrance, such as times she had to sit down on some activities she was physically incapable of. She felt so blessed to be surrounded by very supportive people, including the girls of Miss Galaxy Australia 2016. On finals night, she pulled up all her confidence to go up on stage to introduce herself, “Olivia Raffaele – Miss Cawwwwwindaaaalllee!”

Olivia was quite surprised on how she presented herself that night. She did so well that she made it to the Top 15. She paraded in her long gown, her swimsuit and walked and spun without any expectations of anything. She was relieved of the pressure due to her acceptance of her condition and that everyone encouraged her throughout the whole experience.