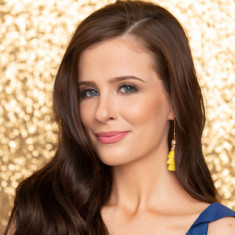 Nimmi Augustine was raised as a first generation Canadian. Despite the challenges of balancing two cultures, she grew to embody both the Canadian society she lived in and embrace the Indian heritage her parents strived to instil in her. She was fortunate to grow up in the multicultural haven of Toronto. Her love for diversity fostered a sense of compassion, equality and discovery that is manifested in a love for global food, art and travel.

At 17 years old she enrolled to become a Naval Officer in the Canadian Armed forces. She attended the Royal Military College of Canada where she graduated First-Class in Electrical Engineering, all while achieving exceptional physical fitness standards, bilingualism, and holding leadership roles during the academic year. On completion of her degree she moved to Victoria, British Columbia to continue her training as a Marine Systems Engineer where her training has afforded her opportunities very few 23 year olds can speak of.

Aside from the high demands of the military, Nimmi practices her own sense of a balanced lifestyle. Being an ambitious health and fitness advocate, she decided to challenge herself to a different degree. She began to compete in fitness competitions in the Bikini Class. She has competed in Competitions in the USA and in Canada Placing in all three. The sport encompassed a great deal of discipline and determination. Team sports have always been a part of her life, starting with soccer at age 4 for 8 years including a period where she played competitive and then transitioning to rugby where she played in high school and in university.

Nimmi’s passions also extend to the arts as she joined dance at a young age and grew an interest for Hip Hop where she has danced competitively and has been part of a company. Upon moving to Victoria she grew an affinity to Brazilian Partner Dancing, Zouk. Her passion for mentoring led her to volunteer at Big Brothers Big Sisters as a Go Girls Facilitator, to promote healthy minds and healthy living to girls between the ages of 8-12 years old.

She is also has a dedication to international affairs and development as she is a member of the Canadian International Council where she takes part in discussions to address pressing problems in the world today.

Now she is making a new career transition as she is pursuing a Masters of Global Affairs at the University of Toronto in order to progress her career in fields dealing with international security and international development. She has a particular interest in peace and security of women and children in developing nations.

Nimmi believes her leadership skills, education, compassion, discipline, and determination will help her to make an impact in her community and hopes to make Canada proud as she takes the Miss Universe Canada stage.

What is the Occupation of Nimmi Augustine

I’m not sure how unusual this talent is but I can usually get a good read on people within the first couple of hours of meeting them. This means I have an understanding of their character, their upbringing, and possibly even some details they didn’t even know about themselves.