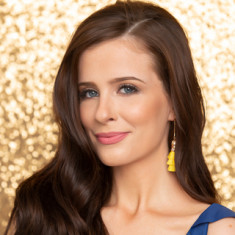 Nika Gantar was born and raised in Bedford, Nova Scotia, but spent many of her summers travelling through Europe, including regular visits to the picturesque country of Slovenia where her dad was born. She graduated from the Halifax Grammar School with high honors and received her IB Diploma in 2016. Currently, she is studying at the Berklee College of Music in Boston on an $80,000 scholarship, pursuing a degree in music. She participated in the Kiwanis music festival for several years, placing in every category, and winning first place on five occasions. She has received several awards, including the Chico Berardi award, and the Castillia Performance Arts Award. In high school, she established a charity called “Malala’s Dream”, and raised thousands of dollars for the education of women in third world countries. For her humanitarian efforts, she received the Halifax Community Service Award, as well as the Lieutenant Governor’s Medal. She has played the lead in several musicals and plays, including Charity in Sweet Charity, and Patrice in 13. Her parents instilled a love of reading in her from a young age, and she continues to be an avid reader as well as an aspiring poet and songwriter. Nika speaks four languages, plays the piano, and took dance lessons for over ten years. She is convinced that performing is the greatest gift in the world, because it allows her to surpass what is conceivable and decide what can be (and she doesn’t mind the applause!).