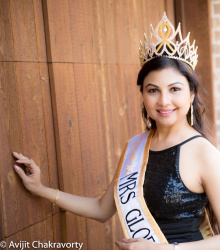 1st Indian women and 1st Indian Cancer Survivor to represent India at Mrs.Global United and Win Mrs.Global United 2017 at Minnesota in Minneapolis USA on 22nd July 2017 . This pageant is associated for a cause of “Childhood Cancer Awareness and Research”
Namita always says “Go conquer the world with love"

Namita is Founder and Managing Director of her Company “Young Minds” Educational Solutions and Consultancy Services ,
Namita is a multi – faceted personality , a true woman of substance ,she has devoted extensively in the educational filed , her work is spread out in her country India . She is An excellent Entrepreneur who has launched her own brand of Ice creams known as “I Scream” . Bachelor of Home Science with Human Development as a Major , MBA in HR , PG in Educational administration . In true sense Namita is a Fighter and a Survivor YES, she is a Cancer Survivor .Has also Won Mrs. India Photogenic 2015.
Namita is Brand Ambassador of Nasik Municipal Corporation‘s Election Campaign 2016 – 2017. Brand Ambassador of “Vastram” the Design Studio , Brand Ambassador of “So Cute”Salon .
Selfless devotion for her work with Social cause, may it be with Cancer Patients , Children with Down Syndrome, Underprivileged Children , Physically or Mentally challenged , she is all there to extend her support .
With her extensive experience and expertise now Namita is marching ahead with Motivational Talk sessions across the country ,which she calls “Living with Positivity” Namita is married for last 17 years and a mother to a teenager son .
Namita has recorded more than 40 awards for her work in Educational , Social and Entrepreneurial sector , to name a few of the International and National awards are

Which School Did Namita Kohok Attend?