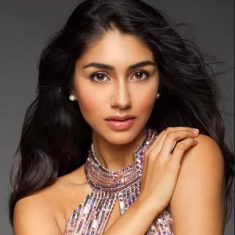 Megha Sandhu recently graduated from her program in Behavioural Neuroscience and works as a part time model, actress and entrepreneur. Growing up in Montreal with a special needs brother she learnt early on to accept that everyone has a combination of both strengths and weaknesses and that compassion and patience go a long way in speaking across our differences. Additionally, she aims to highlight the importance of being a strong woman and wishes to bring to light the notion that ambition and femininity can go hand in hand.

She therefore took it upon herself to begin volunteering in public schools with special needs children and was determined to make a difference on a greater scale. Megha entered Miss Teen Quebec in 2012 and went on to win Miss Teen Canada that same year. Empowered, she spoke in front of 20,000 youth at We Day Vancouver. One of her accomplishments took place that same year when she travelled to Kenya, Africa with Free the Children to help build a primary school. She realized then that pageants are a platform to not only achieve your own personal dreams but are a gateway to genuinely help and inspire others in need.

Megha is the Co-President & Co-Chair of the Montreal based VIVO Fund. The VIVO Fund organizes an annual charity fundraiser towards the Neonatal Intensive Care Unit (NICU) of the Jewish General Hospital to help fund and facilitate acute care and follow-up of premature newborns.

Megha was trained at Straeon Acting Studios where she was coached in acting for film/television, camera and scene studies and is a member of ACTRA Montreal. Her recent work includes; a stint at 24 Hour Plays where she co-wrote and conducted short comedy skits for local audiences and featured in a commercial for VICHY Cosmetics. Megha also has a natural flair for accents and enjoys putting on comedy skits in her free time.

Megha is also a well-being and fitness advocate and enjoys surfing, hiking and especially boxing for its confidence enhancing abilities in potentially dangerous situations. She tries to lead a healthy and compassionate life where she adopts a plant based diet and lifestyle. She can take calculated risks and gets her adrenaline kick from adventure sports like paragliding and cliff diving.

Megha’s education, acting, modeling, volunteering, drive and humanity supplement her previous pageant experiences including; Miss Teen Canada and Top 10 at Miss Teen World. Becoming Miss Universe Canada has been a lifelong dream of Megha’s and one that she would be honoured to accomplish so she can make her country proud on the Miss Universe Stage.

What is the Occupation of Megha Sandhu

Which School Did Megha Sandhu Attend?