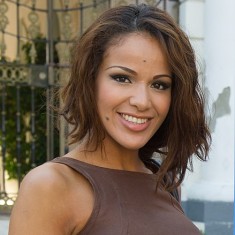 Seven contestants signed up to compete at the 2013 Miss Gibraltar beauty pageant. Maroua Kharbouch was BetVictor's favorite to win Miss Gibraltar with the bookie offering odds of 8/13. As all seven contestants chose their order of appearance for the upcoming pageant at random, in the presence of Mayor of Gibraltar Anthony Lima at the City Hall, Kharbouch selected number one.

At 22 years of age, Maroua Kharbouch was crowned Miss Gibraltar 2013 at the 51st edition of the pageant held at the John Mackintosh Hall on 8 June 2013. She received part of her prize in the form of a cheque and clothing allowance from the Minister for Culture Steven Linares, at a ceremony held at the City Hall on 25 June 2013.

Having been crowned Miss Gibraltar 2013, Maroua Kharbouch would automatically represent Gibraltar at the 2013 Miss World pageant in Bali, Indonesia. By 12 September 2013, Kharbouch was ranked third in Miss World's People's Choice Award, which would gain the award holder automatic entry into the Miss World final. Votes were cast by the general public via the official Miss World mobile app which was available for Apple and Android with proceeds going to charity. Kharbouch was leading the voting by 18 September 2013, a position which she maintained by 26 September 2013. She eventually won the award at the Miss World final two days later which saw her fast-tracked to the Top 6 finalists but fell short of the Top 3 positions. She became only the second Miss Gibraltar to make the semifinal cut at Miss World ever, and the second to make the Top 6.

Kharbouch held hands with her Spanish counterpart Elena Ibarbia, who also made it to the Top 6, as they anticipated the final results. This was seen as an important gesture which contrasted with the political tensions between both countries. Chief Minister of Gibraltar Fabian Picardo described the image as "moving", stating that they were an example of

"the reality of the symbiotic relationship between the people of Gibraltar and the Spanish people of La Linea and the towns around us. Friendship. Respect. Understanding."

Maroua Kharbouch returned to Gibraltar on 30 September 2013 when she was greeted by Minister Steven Linares and Mayor Anthony Lima at Gibraltar International Airport.

Maroua Kharbouch is a Client Relationship Manager Assistant; Her hobbies and interests include modelling, fitness and volunteering; Is multilingual speaking English, Spanish and Arabic.