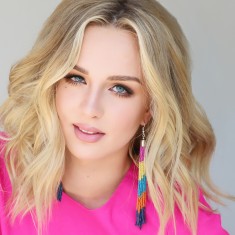 Skelton is a Junior at Buena HIgh School, an honor roll student, ASB leadership member, a published author and an advocate to eliminate bullying within our communities.

When she was 11 years old, Skelton’s younger sister Charlie was born missing the left side of her heart. Throughout the many hospital stays, Skelton started to see how different the atmosphere within hospital walls were when compared to her school environment. While in the hospital, children with varying childhood maladies played together without any hesitation. Nobody in the hospital cared if you had tubes coming out of your chest or IV’s. In fact, nobody really even noticed if you had hair or not, scars were not scary, but were signs of a true warrior battling unimaginable odds. However, back home while in school, she noticed people were laughed at for being different and called names.

When Skelton’s family moved to be closer to Children’s Hospital Los Angeles and their extended family, she found herself the subject of ridicule. As the “new” kid she was teased, laughed at and couldn’t understand why kids could be so cruel to someone they didn’t even know. By age 14, Makayla knew she had to do something. All she could think about was how her little sister who has scars all over her body would be treated in school? Skelton saw first hand how hard her little sister had fought to live and was not about to allow kids to tear her sister down because she was different.

Skelton published her first book called, Finding Your Light, an interactive journal to help open up the conversation not only between students and teachers, but also between students with their families. Skelton built a curriculum around her journal in honor of her sister Charlie called H.E.A.R.T. An acronym that stands for; Harmonizing the youth within the community, Educating them on childhood maladies, learning to Accept and Adapt to one's disabilities, being Real and true to oneself, and Together we can thrive.

What is the Occupation of Makayla L Skelton

Wanted to be able to further my platform and make a difference within our communities.

What is the Nationality of Makayla L Skelton