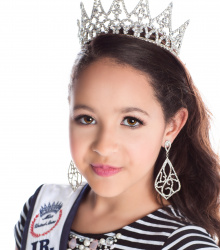 Miss Jr. Teen Texas 2015, Madison Pallanez is 13 years old and in the seventh grade at Northland Christian School in Houston, Texas. She is very active in sports (volleyball, soccer, softball, etc) as well as debate, theater and art club. Madison has been modeling and acting since she was four years of age. She has had the great fortune of gracing the cover page in a Sears-Canada magazine as well as a three-page-spread in the same magazine. She has participated in many local theater productions with her favorite roles being, “Annie” in Annie, “Dorothy” and “The Wicked Witch of the West” in separate productions of The Wizard of Oz. Madison has also been in several film and television projects in and around the State of Texas.

Madison has been on the A/B honor roll at her school since the 2nd grade, as well as recognized as a Duke Tip Scholar since the 3rd grade. Madison enjoys reading and drawing in her spare time as well as spending time with her friends at the mall, the movies, or at home. She is also quite the baker and enjoys making and eating cupcakes as often as she can.

Madison is very excited to share her passion for ending Childhood Hunger and looks forward to working further with Kids Against Hunger and Global Aid Partnership to alleviate hunger in Houston and Around the World. She feels that food should be something that no child should have to be without! Madison loves volunteering and serving her community and church and looks forward to putting her crown to great use to END HUNGER!

Madison proudly supports Houston Kids Against Hunger and Global Aid Partnership to eradicate childhood hunger in her local community and around the world. She has hosted many food packing events and has personally packed over 100,000 meals that were shipped directly to a school in Malawi, AFRICA. She has also collected about 50,000 pill bottles to serve the Malawi project. These bottles will be used to safely transport medicines from the one hospital in Malawi to the villages.