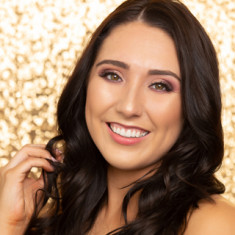 Current Miss Newfoundland and Labrador, Mackenzie Dove, is very much looking forward to the chance to represent her home province on the national stage at Miss Universe Canada.

After being empowered through the Girls of Science, Engineering, Trades, and Technology Program (GOSETT) herself as a child, Mackenzie has become very passionate about providing this same early exposure to Science, Technology, Engineering, and Math (STEM) careers to young women. She feels the knowledge and experiences gained through her involvement in the program have lead her to great achievements and helped shape her career vision. One such achievement was her becoming the Pilot of the Clarenville High Robotics Team, which won the Ranger Class of the International Mate Underwater Remotely Operated Vehicle (ROV) Competition in 2014. A member-turned-mentor of GOSETT and a presenter with Memorial University’s Let’s Talk Science group, Mackenzie volunteers presenting to children of all ages on a variety of STEM topics.

In 2010, Mackenzie lost her grandmother and role model, Verley Matthews, to Multiple Myeloma – a cancer affecting the white blood cells. Inspired by her grandmother’s legacy, as well as her early exposure and natural inclination for STEM subjects, Mackenzie chose to dedicate her life to working and volunteering within the Oncology field. She spends much of her free time volunteering with the Canadian Cancer Society in their “Living Room” providing and assisting cancer patients and survivors with wigs, turbans, scarves, and breast prosthesis free of charge. In addition to that, she became the Co-Chair of Memorial University’s Relay for Life which raised over $100,000 throughout her time involved. Driven by the memory of her strong and generous grandmother as well as the strength of the people she met through the Canadian Cancer Society, Mackenzie is working to become a Clinical Oncology Pharmacist in hopes that she can support and strengthen the community as much as it has her.

Having been involved in student council and public speaking competitions in her high school years, leadership skills came naturally to Mackenzie. In 2014, Mackenzie attended her first Session of Newfoundland and Labrador’s Youth Parliament which is a by-youth for-youth multi-partisan event and organization that brings together 40 young men and women from across Newfoundland and Labrador annually to discuss and debate issues and resolutions facing their communities, province, and the country. This opportunity opened her eyes to the world of politics and the importance of female involvement, engagement, and representation within it. Mackenzie was elected to be Vice-President (2015), and then Chairperson and President of the organization’s Board of Directors (2016). During her tenure as Chairperson and President, Mackenzie led the Board of Directors in an outreach campaign which ultimately led to the organization’s first Session in 51 years where there were more female then male delegates participate. Mackenzie continues to advocate for female involvement in politics and recently participated in Equal Voice NL’s Daughters of the Vote event in commemoration of the one hundredth anniversary of women gaining the right to vote. In 2018, Mackenzie started the “Be Heard. Be Her.” project with the goal of working to educate, encourage, and empower young women in her province to explore new opportunities and use their voices.

Mackenzie’s hard-work, dedication, and generosity have earned her various awards and accolades. She was named the 2016 Young Woman of Distinction by the YWCA NL as well as the Student Volunteer of the Year by Memorial University of Newfoundland and Labrador in 2018. Additionally, she received a URock Volunteer Award from the Government of Newfoundland and Labrador (2015). Given her passion for working in the Oncology field, her most cherished award thus far is the Canadian Cancer Society NL’s Inspirational Achievement in Volunteer Youth Leadership Award (2016).

In her downtime, Mackenzie enjoys hiking, spending time with her rescue cat, Oliver, mermaiding, meeting new people, and taking the time to be a “tourist at home” to explore the many beautiful communities in her province. Given her outgoing personality, strong drive, and pride for her province and country, she is eager and excited to have this opportunity.

Which School Did Mackenzie Dove Attend?