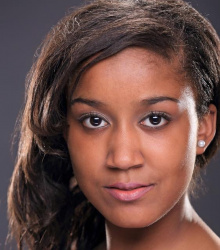 I started competing in the Miss Kansas local pageants under the Miss Kansas Organization in Febuary 2015. I joined because it was my senior year of high school and I always wanted to try it but never had the time, so I thought why not? I wanted to show young girls that despite adversity, you can work really hard to achieve your goals. It was the best thing I have considered. After my second local pageant I won Miss Meadowlark 2015 and had the opportunity to compete at the Miss Kansas pageant June of 2015.