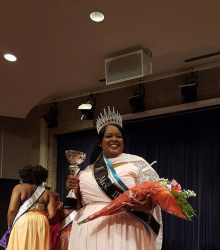 I am Lovice Brinkman, recently crowned Mrs. Illinois Plus America, 2016 on April 16, 2016. I will now being going to Nationals to represent Illinois in Dallas, Texas June 29, 2016-July 2nd, through the Miss Plus America system. My platform in Living with Vitiligo ~ Educate, Advocate, and Inspire. My son was diagnosed with Vitiligo in the fall of 2014. For those who do not know what Vitiligo is, Vitiligo is a skin disease in which pigment is lost from the areas of the skin usually in blotches. Vitiligo is not contagious and affects both male and female equally. The exact cause of this medical condition is not known. Some scientist and researchers believe Vitiligo is caused by an autoimmune disease, while others believe it to be genetic.  Most people refer to this disease as the “thing” Michael Jackson had. My goal is to bring more awareness about this disease.

Which School Did Lovice Brinkman Attend?

I have obtained my BS in Psychology