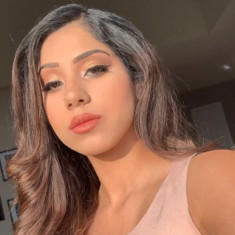 Lovepreet Sidhu was born and raised in Brampton, Ontario. She will be entering her fourth year as an Honours Political Science student at Wilfrid Laurier University. Currently, she works as a receptionist/administrative assistant at Sidhu Traffic Tickets. She also models part-time and has worked with several photographers, shops/boutiques, and has walked in fashion shows in Toronto.

Political Science is a program that Lovepreet holds dear because she is constantly learning about various political affairs taking place across the world. She is very passionate about voicing political concerns that are often neglected due to the lack of awareness and interest shown by the general population. Aside from modelling, she is looking to pursue a career in law as either a paralegal or lawyer to help those facing injustice or difficult situations receive the aid they need. As a component of one of her courses, she was required to volunteer her time in an organization that demonstrates crime prevention strategies. The organization she chose was St. John’s Kitchen in Kitchener, Ontario. During her time there she interacted with several individuals who were victims of poverty, crime, and inadequacies within the criminal justice system. This opened her eyes to the importance of educating herself and others about such prevalent issues occurring in the community.

Becoming a successful model would a dream come true for Lovepreet. She is grateful for the opportunities she has received thus far and only hopes to grow from there! She has walked in fashion shows in Toronto and has done commercial work for local stores and businesses. Lovepreet has worked with renowned Bollywood designers including Payal Singhal, Dinesh Ramsay, Rajat Tangri, and Nupur Kanoi. She was also a part of the University of Toronto’s ‘Back to School’ campaign in 2018.

Miss Universe Canada is Lovepreet’s first pageant and though that comes with new challenges, she is certain that this opportunity will only catalyze her dreams and ambitions. She hopes to make the most of this pageant and open doors for other girls who want to pursue their dreams in this industry but just need a little push!

What is the Occupation of Lovepreet Sidhu

Which School Did Lovepreet Sidhu Attend?