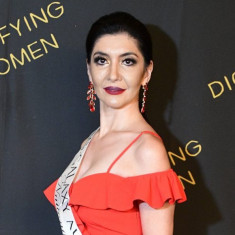 Leila Loei is a Migrated Food Science and Technology Engineer and a professional runway fashion model from Iran. She has followed up her dreams by completing her post graduate degrees in Environmental Health and Heath Science at QUT in 2006.

Since 2016, she has experienced her new challenges as a single mother of two kids, a boy 10 and a girl 8. Positivity, confidence, and persistence are key in life, so never give up on herself. In the meantime, She never stops challenging herself so continued and completed her Law skills and knowledge in Australian Migration Law and Practice in 2018. She has been awarded for a few exemplary awards by her work place. People describe her her as strong, independent, confident lady by applying her leadership skills.

Her passion is studying / education and business, of course beside all above She indeed lives in fashion, music & Arts to fulfilling her spiritual. Even though she was tilted as an engineer in her mother land, she was unable to responding to her passion regarding acting and live in Arts. So she decided to get involved in acting for kids’ plays in a theatre, casting in short movies and performing as a fashion modelling for a few years prior to her migration to Australia in 2003.

She was selected and accepted for Ms Persia Universal Elegance 2019. She is contesting as Ms Galaxy Australia National Finalist pageant 2019 to achieve her childhood wish due to facing with no culturally norm. Being part of fundraising charity events for vulnerable people such as children and women empowering and motivating her to achieve her goals.

Challenging and developing herself, learning new things, makes her feel like the sky is the limit!!

What is the Occupation of Leila

Which School Did Leila Attend?

It was my childhood dream and this platform provides me more opportunities to be a part of community to follow up humanity by helping people.

What is the Nationality of Leila