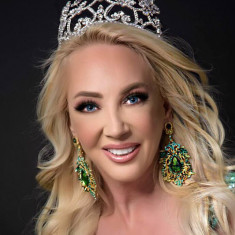 She was born in Winchester, Massachusetts and raised in Miami since the age of five. She attended Florida International University and received a BS degree in Elementary Education and a MS degree in Varying Exceptionalities (Special Education). Laura was an award winning Special Education teacher for over 10 years in Miami, Orlando, and Titusville, Florida.
At the age of 28, she met her soul mate, Dr Michael Kutryb, Ophthalmologist, on a blind date. They shared the same dreams of love and family. They married a year later on the day they met. Together now for almost 20 years they have 3 beautiful teenage daughters (16, 18, 19) and live on Merritt Island in Florida.
Laura is now the media specialist for her husband's medical practice. In the past few years she has held the titles of Mrs. Cape Canaveral, United States, 2015, Mrs Atlantic Coast Galaxy, 2016, Ms National United States Woman of Achievement 2018. As a pageant title holder and entrepreneur, she is involved in many charitable endeavors such as; sitting on the board of the Brevard County Humane Society (Fundraising Chairman), Member of the Rotary Club of Cocoa, FL, Member of the International Propeller Club (Port Canaveral), & The Florida's Children's Home Society.

What is the Occupation of Laura Anders Kutryb

Friends told me it was my destiny

Traveled to Tokyo and frequently travel to Colombia

What is the Nationality of Laura Anders Kutryb