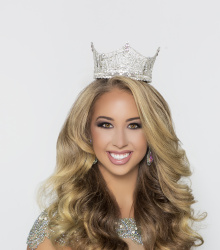 Kolby, 18 is the daughter of Dr. Timothy & Deana Kayworth. She completed her 12th grade year at Lorena High School in June. While attending Lorena High School she was a member of Peer Assistance Leadership (PALS) and ran Varsity Track all 4 years. Kolby was a member of National Honors Society and earned National Cheer Association, All American honors all 4 years, serving as captain of the cheer squad her senior year. Currently Kolby is attending Baylor University majoring in business with a focus in marketing and international business. When she is not busy with school, Kolby volunteers her time at numerous organizations including Waco Center for Youth, Special Olympics, Texas Angels Pageants and events for the American Cancer Society. She was a Heart o’ Texas Sweetheart and served in Teen Leadership Waco in 2014. By capturing the America’s National Teenager title, Kolby will be traveling all across America to speak and volunteer with various organizations, such as be an ambassador for the Boys and Girls Club of America (ANTSO’s national philanthropy).

“Contestants who competed at ANTSO are among the brightest in the country, having won their state representation through academic success, leadership, community service, interview and onstage competitions. America’s National Teenager was founded in 1970 upon the principles of celebrating young woman’s smarts and big heart. Therefore, while the world around us has changed, our company has not. We still focus on the female’s academic potential, contribution to community, and the ideals and power that women have, at any age, to make a difference,” states ANTSO CEO and Owner, Jenny Telwar-Daniel.

The 2015 National event in Tennessee, TN consisted of several days in competition, and fun city events like a cowboy themed luncheon and a family fun game night. Winners walked away with more than $40,000 in scholarships for college along with various other prizes.

“ANTSO truly promotes a positive and enriching experience for all young women involved and their families. While each young woman competes for several thousands in scholarship, she also gets to spend quality time in positive, self-esteem building activities with her family. It’s a win-win for all involved,” states Telwar-Daniel.

Parents, young woman, and educators interested in any of ANTSO’s programs, at either the state or national level, are encouraged to contact the America’s National Teenager Scholarship Organization office at 615.405.5107 or visit its website at www.nationalteen.com