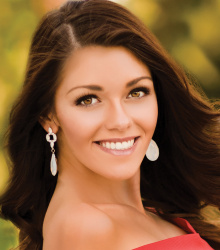 Kirsten Kuniyoshi, 2015 Miss Teen WV United States, is a native of Fairmont, WV, who has been involved in pageantry for the past 9 years– previous titles include WV’s Perfect Junior Teen and the WV Three Rivers Festival Junior Miss. The nineteen year old’s love for being on stage and performing began when she was very young. During her high school career at East Fairmont High School, Kirsten was a member of the Busy Bee Band’s dance team. As a Honeybee, she had the wonderful opportunity to perform on a cruise, in the Bahamas, during the Disney Main Street Parade, and once played the role of the Wicked Witch during the band’s annual production, Follies.

During the past academic year, Miss Kuniyoshi has focused on academics and obtaining career skills as an undergraduate at West Virginia University. She founded “The Princess Project” with the help of some of her amazing pageant friends. The members of the Princess Project visit the WVU Children’s Hospital dressed as Disney princesses bringing gifts and smiles to the patients and families. She has participated in Relay for Life and is anxious to be assisting Haley Holloway on a benefit basketball tournament for the American Diabetes Association that will be taking place on June 26th. Kirsten is also organizing a High Heel-a-thon to benefit the Breast Cancer Research Foundation that will be held in August in addition to assisting the Dakota Austin Lane Foundation with starting local food banks.

During her free time, you can usually find Kirsten modeling, laughing, or hanging out with friends at Lavish Boutique. Because of her love for fashion, especially formal wear, she aspires to open a prom and bridal boutique of her own.