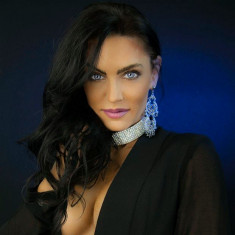 I am originally from Southern California, the lead talent director at Manikin Models, a Model, Actress, Investigative Reporter, Spokesmodel, Pageant Queen, former TV Host, I am continuing my pursuits in the entertainment industry with a greater focus toward film and television.

As the lead Talent Director at Manikin Models and Talent, I have the opportunity to work with talent around the world. Manikin is a global agency with castings in 104 countries.

Being of Romanian heritage I've represented Romania as the Romanian delegate in the Ms. Planetary International Pageant where I then competed for the title of Ms. Infinity Air and Fire 2018

I hold social responsibility in very high regard, working with various outreach groups throughout the years. The philanthropy endeavor closest to my heart is Scion for Soldiers.
Working alongside with the Military Assistance Mission I had the honor of managing the project interviewing 47 soldiers about their wartime experiences in Iraq. The interviews were submitted for a chance to win a new Scion; where 3 deserving soldiers won 3 brand new Scions.

What is the Occupation of Kellie Dionne

Which School Did Kellie Dionne Attend?

I started to compete in pageants for various reasons. Combining pageantry with a platform to make an impact in this world provided me with many opportunities to reach the brokenhearted and to have an impact on our youth. Growing as an individual and developing new relationships have enriched my life in so many ways.

#1. It takes 6 months to build a Rolls Royce and 13 hours to build a Toyota. #2. Grasshoppers have white blood #3. Chocolate milk was once sold as medicine.

What is the Nationality of Kellie Dionne

5 Things I wish someone told me

How to become a glamour model; tips on becoming one