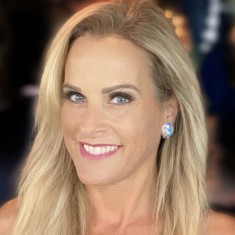 On May 29, 2016, Karyn Turk was crowned as Mrs. Florida US Continental at the Eissey Campus Theatre in Palm Beach Gardens, Florida. She competed in the pageant as Mrs. Wellington, representing the West Palm Beach area.

From her personal webpage:
As one of the country’s most up-and-coming political personalities, Karyn Turk is the media powerhouse we’ve all been waiting for. Currently featured in Amazon Prime Video’s satirical comedy, “Fake News: A Trump Story,” Karyn can be seen spoofing what she does best; voicing her beliefs with conviction, courage and confidence to spare.

For over two decades, Karyn has worked as a multimedia journalist, television producer, host, editor and brand ambassador specializing in business, technology, politics and all things relevant to the modern woman. In 2018, Richtopia ranked her on their list of Top 250 Most Influential Business Journalists in the World. Karyn also holds the title of Mrs. Florida 2016 and was named one of Florida’s Top Power Women and Influencers in 2015, and has been featured in several national magazines. To add to her credit, she has appeared in the television series “In Sanity, Florida,” Showtime’s “The Circus: Inside the Greatest Political Show on Earth,” and the award-winning film “Nearly Departed,” and the new movie on Amazon Prime, "Fake News a Trump Story".

Currently you can catch her as the host of Red America Radio and the entertainment- based Eye On networks. She’s also a social media editor for various conservative news outlets, and works as an independent consultant to both national and international media outlets. Most notably, she has been gaining tremendous steam as a political news correspondent, having garnered a massive following after her pre- and post-election coverage.

Before delving into the world of politics, Karyn first gained recognition as a businesswoman. By age 28, Karyn was a top national sales director in the print marketing space in the 1990’s. Realizing the potential for online distribution, Karyn helped pioneer the online video content for revenue platform, and was recruited by CBS Radio to oversee and develop nontraditional revenue sources for the South Florida market. After digitizing the medium and positioning them for sale, the company was sold in 2012 to Palm Beach Broadcasting for an unprecedented $50 million. In the years following, Karyn began taking on more customized projects that utilize her strong interpersonal skills, offering media and crisis management for professional athletes, celebrities and politicians.

While she may be a fixture at Ma-a-Lago, Karyn isn’t your typical socialite. She is extremely open about her own history as an adopted child as well as wife, mother, stepmother and grandmother. She’s a supporter of Israel, and has worked tirelessly with organizations like Anthony Kennedy Shriver’s Best Buddies, fostering inclusivity, tolerance and unity across the world. Other personal missions include research for Alzheimer’s Disease which her mother suffered from, children’s causes, and the National Federation for Republican Women.

Karyn lives in South Florida with her attorney husband, Evan Turk, with whom she works with on high profile client cases that are often splashed across the day’s headlines.

What is the Occupation of Karyn Turk