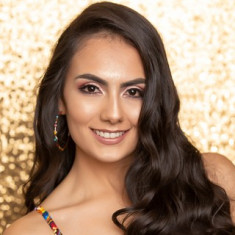 Karol Lopez was born in a very small town called Pacho, in Colombia. She moved to London, Ontario when she was 14 years old and has since considered Canada her true home. She came to Canada as a refugee fleeing the war in her native country. She flew from Colombia to Miami to New York to Buffalo by herself and stayed at a homeless shelter for a few days before being able to cross the border into Canada where she was welcomed as one of its children. Karol is thankful to have her family here with her now and considers herself to be blessed to be able to call Canada her home. As a refugee she believes that immigration and multiculturalism represent what the Canadian essence is all about, and because of this, she feels like she embodies and exemplifies that essence.

Karol graduated from Wilfrid Laurier University in 2015 in journalism and contemporary studies. She also obtained a post-graduate certificate from Conestoga College in Broadcast journalism and documentary Production. And finally, she graduated from Fanshawe College as an office administrator and is currently learning French as her third language after Spanish and English. Karol is passionate about education and she believes that the knowledge you gain is the only thing that cannot be taken away from you.

Karol is described as perseverant, brave, and courageous and these are the traits that she wants Canada and the world to see when she has the opportunity to represent Canada internationally. She has learned that in order to be happy and successful all she needs to do is follow her dreams. A reminder of this lesson is her favourite quote by the author Paulo Coelho: “Tell your heart that the fear of suffering is worse than the suffering itself. And that no heart has ever suffered when it goes in search of its dreams…”

Karol has graced the runway for many national and international designers and has walked at Toronto Fashion Week, International Fashion Encounter, Latin American Fashion Week in Canada, Fashion Art Toronto just to name a few. Through her modeling work, Karol has volunteered with many special causes and charities such as SickKids, Children without Borders, Youth Day, Fashion against Poverty, Easter Seals Charity, and many more.

What is the Occupation of Karol Lopez Penagos

Recently I started to practice kickboxing,My unusual talent is the ability to dance all three major Latin dances: Bachata, Salsa and Merengue. Despite being a common ability where I am originally from, this is an unusual talent in Canada