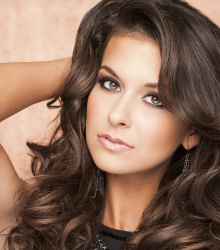 Kaileigh Bullard studied Music Business at Belmont University. She is a singer and songwriter and released her six-song, self-titled debut EP in 2012. Kaileigh Bullard has been the acoustic guitarist and background vocalist for Hayden Panettiere’s character, Juliette Barnes, on the hit ABC show, Nashville since Season 1. She was also selected as a background vocalist for the 2014 CMA Country Christmas show on ABC, where she shared the stage with Alan Jackson, Idina Menzel, Jennifer Nettles, Leann Rimes, and Pretty Little Liars’ Lucy Hale. Kaileigh Bullard is also an actress with the Avenue Agency in Nashville. She nabbed the lead role in Jerrod Niemann’s “Buzz Back Girl” music video, in which she plays drums and guitar, was featured in Kid Rock’s “First Kiss” music video, and was cast in a supporting role for LifeWay Productions’ Alive & Free film.

When she’s not performing, recording, writing, or acting, Kaileigh Bullard enjoys directing her 5th grade Children’s Choir Class at church, teaching weekly fiddle lessons, and tap and clog at the Dancers’ Academy. She has also been very involved with the Crohn’s and Colitis Foundation of America and Girls With Guts. Kaileigh Bullard created a campaign known as #IHaveGuts, in order to encourage and empower those with an Inflammatory Bowel Disease to share their stories in order to elicit change and find a cure. As part of this campaign, she directed and produced an IBD Awareness video, featuring her brother, Kolton, and five other IBD patients. She also wrote a song called “Guts and Glory,” which was released as a single to iTunes. All proceeds from the sales of this song go to the Tennessee chapter of the CCFA.

Which School Did Kaileigh Bullard Attend?