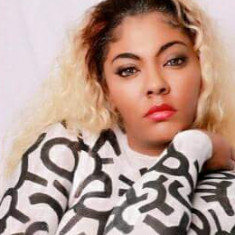 I am the daughter of Gayvette James also know as GiGi blues singer My Father is. Johnny Wescott he served our country I am grand daughter of famous jazz musician Dottie Smith and the great niece of famous Gospel singer Katherine Parham. Also know as Kitty Parham from the Clare Ward Singer's.

I began my career as a artist at a very early age I wasn't taught to sing it was a natural spiritual gift from God. I was encouraged and inspired by my family members I watched closely. I toured with mainstream artists on the secular and gospel mainstream industries. I sang background for group's like Pink Floyd, Handson just to make a few while in school I needed extra money so I became a video vixen for mainstream artists. To me it was just a side job but it grew into something else beautiful I began a modeling career I featured in many magazines internationally and locally . I from there was offered the opportunity to compete in a Pageant I placed but wasnt actually crowned. I from there became a director and taught other women how to compete o competed twice I placed twice but was crowned I teach my girls that you don't need the crown to be the queen you are beautiful just the way God made you express your self in a positive light. I am still encouraging other pageant Queens to be positive in the process of competing I'm holding events for the Queens in the local community

What is the Occupation of Jessica James

Which School Did Jessica James Attend?

I started to encourage other women that beauty doesn't have a shape or a color we all should celebrate beauty its God's creation.

Adventurous, love family time with my kids i love teaching at my local church to children in the community

What is the Nationality of Jessica James