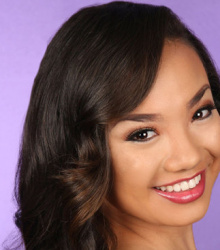 When competing in pageants, you have to be informed of the major issues going on in the world and be able to speak in front of a crowd and express your opinion in a polite, nonoffensive way. You need to be a leader that's not a afraid to stand up for yourself and others.

All those qualities make a great politician as well. That's why many woman choose to run for office after pageants. (Read: Do Politics and Pageantry Go Together?)

Jeanné Kapela is 50 percent Native Hawaiian and was born in Kona. She was raised on a small coffee farm in Captain Cook. The 23-year-old just announced her candidacy for the Hawai'i State House of Representatives, District 5, which runs from North and South to West Ka'u. Kapela is currently pursuing a graduate certificate in social justice from Harvard University.

''Everything I've accomplished in my life, thus far, is a result of values I learned growing up in Kona," Kapela said. I want to inspire our community and its keiki to take pride in the extraordinary place we call home."

Kapela is determined woman who always wants to help others. Her pageant platform was "Raising Awareness of Human Trafficking." She chose a platform very close to her heart, having a cousin that was sold into sex slavery at the age of 14. Kapela didn't want any more victims of human trafficking, so she decided to do something about i by starting her campaign #ItEndsWithUs. (Read: How To Turn Your Passion Into A Successful Pageant Platform)

If elected, Kapela plans to protect West Hawaii's agricultural and coffee industries, promoting a quality education to all children and champion the need of the island's workforce.

''I will work to build community schools that provide our keiki with quality and well-rounded education, make Hawai'i affordable for hardworking families, and protect local farmers and their products, especially Kona coffee, one of our state's most iconic treasures," Kapela said.

''Becoming Miss Hawai'i taught me the value of public service," Kapella said. "I want to bring that sense of service to West Hawaii's residents, who deserve a leader who will put people before politics."

Kapela is a hard-working girl and never gave up on her dream to become Miss Hawai'i and compete in the Miss America pageant. With this kind of determination, she will be a good leader for Hawaii's residents. (Read: How To Find The Determination To Win)