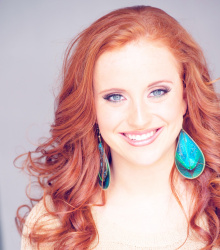 Hannah Reese is the 2015 America's National Teenager Scholarship Organization Hawaii National Miss.  She is also the former 2011 South Carolina National American Miss Jr. Teen and 2010 South Carolina Miss American Coed Jr. Teen.  She is a 2013 Summa Cum Laude graduate of North Augusta High School.  She is currently a sophomore at Clemson University majoring in Communication Studies and minoring in Spanish.  She is the founder of Project HOMAGE, an organization that teaches children about the military and ways they can show appreciation to Veterans and those currently serving in the military.  Hannah currently has a 3.9 GPA and was recently named Clemson University's Most Promising Communication Studies Second Year Student.  In the fall of 2015, she will be interning with Disney in Orlando, Florida.

Project HOMAGE - Honoring Our Military with Appreciation and Grateful Enactments

Which School Did Hannah Reese Attend?