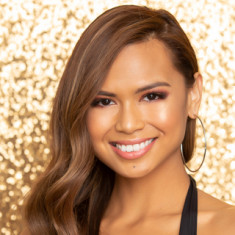 Gloren is a “dancing nurse” who lives her life to the fullest taking on all opportunities that come her way with courage and confidence. Gloren chose a professional career in nursing and currently works at a dementia and complex care home facility. She is a dance teacher, a model and a novice entrepreneur. In addition to these professions, Gloren connects to her community through volunteering and charity work.

In 2008, Gloren immigrated to Canada and became a Canadian citizen. She had been raised in a small town in the Philippines. Transitioning into a different lifestyle was challenging, but nevertheless, it has since motivated Gloren to work hard in achieving her goals. Hospitality has always been one of Gloren’s strongest skills. From working as a server in restaurants and hotels, Gloren found herself engaged with people from different cultures. At the age of nineteen, Gloren graduated as a licensed practical nurse from Stenberg College. Being a nurse motivates her to be strong, and to face all avenues of life with positivity and compassion for others. Gloren discovered her love for dance when she moved to Canada, and eventually became a high school dance team coach. Currently, she teaches dance one on one to beginners and she believes that anyone can dance as long as they have the heart to enjoy it. Gloren became a member of the BC Lions “Felions” Dance Team in 2016. She travelled to the beautiful cities of Toronto and Ottawa where she performed at the Grey Cup Festival. Through nursing and dancing, Gloren established her desire to promote the value of health and fitness. She also stresses the importance of pursuing an education, being culturally aware, and to “pay it forward”.

Upon receiving the title of Miss British Columbia 2016, Gloren uses her platform to bring together her local community to create a positive impact. After gaining the privilege to become a proud Canadian woman, Gloren believes that the best way to give back is to pay it forward to those who are in less fortunate circumstances. The biggest highlight for Gloren has recently been hosting fundraising events. Her most proud moment was bringing the community together to raise money for meals, groceries, and school supplies for a small elementary school in a rural city in the Philippines. Through being involved in community work and attending local events as Miss British Columbia, she was able to defeat her fear of public speaking. As having once been a new immigrant, Gloren understands the feeling of fear. She encourages others to face their fears by living in faith, recognizing privileges, and using the abundance of opportunities life has to offer.

Gloren’s current project “#GlowInTheDark” is a global outreach that defies age, gender, ethnicity, for individuals to share their “glow in the dark” moment. She empowers and encourages individuals to step beyond their fears through social media. Gloren hopes to get more people involved in the movement. With Gloren’s humbling confidence, her determination to make her dreams come true, and her love for Canada, she believes that she is ready to represent the “True North”!