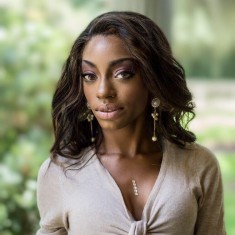 Falice Sade Williams 27 years of age was born in Newburgh, New York. She was a ward of the state as an infant and later adopted at the age of 4 years old with two of her siblings.

She is a multi-talented young woman excelling in dance, singing, drawing, fashion, and writing. Many people like to call Falice a model, singer, and dancer. However, Falice prefers to be called an artist.

"An artist is anyone who does creative art to express the way feel." Falice Said

Over the years Falice has used talents to positively express the way she felt. Falice grew up with a lot of barriers, stigma, and stereotype bound to her often making her feel like she was stuck in a cage. One stigma or barrier as Falice calls them, is that people with her background are destructive to themselves and the environment around them because they do not know how to release their emotions positively. The result of this barrier is usually becoming a ward of the state through a juvenile detention center as a teen or jail an adult. However, having her talents a positive outlet helped her avoid going down that road.

Falice as a young woman struggled with her confidence because she was always being fun of for being adopted, having an adopted mom that was minister and because of being very linky and having large eyes. The lack of confidence made Falice often want to hide, fit in with the crowd and also made her avoid chasing the better which for Falice was breaking the barrier, shaking the stigma and peeling off the stereotypes. Where she lived no one believed in having more for themselves so when people did they stuck out like a sore thumb and got made fun of. In her early twenties, Falice had enough of just wanting more but not doing anything to get it because of people's reaction. She was 22 when she decided to start modeling and still got made fun. Yet modeling helped build her confidence till the point that she was able to stand firm in her beliefs and chase her goals.

To date Falice is working on obtaining her degree in Psychology with hopes to open up her own practice and to use her talents to help others learn how to release their emotions positively, build their confidence and break their own barriers. For the past two years, Falice has worked with the high school students where she resides teaching them the importance of confidence, and self love through runway classes and ending with a fashion show. while working on the degree needed to open her own psychology practice Falice wishes to start her modeling troupe that females of all ages can join to use modeling to help build their confidence and a have a healthy support group.

The Underprivileged - Break the barrier, Reach for greatness

I started competing in pageants because it is an platform for my purpose to reach a bigger audience. There are a lot of women and girls who need to know that no matter what background you come from if you are willing to fight you can break barriers and reach for greatness.