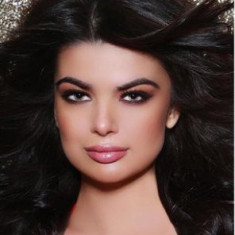 The 19-year-old contestant is from Russia's Kabardino-Balkar Republic, a predominantly Muslim area. Diana Nagoyeva is a sign-language-speaking college student at Kabardino-Balkar State University who just won an award for her master chess abilities. Rather than celebrating Nagoyeva's accomplishments, her hometown is outraged over her participation in the Miss Russia pageant.

She has made conscious decisions to be more modest than her fellow competitors, even choosing a closed swimsuit for pageant events. Despite Nagoyeva's choice to wear a modest swimsuit during the Dubai photoshoot in preparation for Miss Russia, her fellow Kabardins and Balkars have made her the target of much hatred. Many people from her hometown believe that Nagoyeva's participation in the mandatory swimwear competition disgraces her people. Many have resorted to online threats, even death threats, as a result of her participation.

"I really wish you to die in the near future, as you should not live," one person wrote on Nagoyeva's social media pages. "This chick deserves to be stabbed to death as she puts shame on her folk," another person commented. How does Nagoyeva deal with the hate? She does not let the online comments stop her from achieving her dreams of becoming Miss Russia.

While she does not always respond to the comments, sometimes Nagoyeva takes the time to message the commenters and wish them the best. Nagoyeva plans to continue in the competition for Miss Russia despite the awful threats against her life that she receives daily.

Which School Did Diana Nagoyeva Attend?

What is the Nationality of Diana Nagoyeva