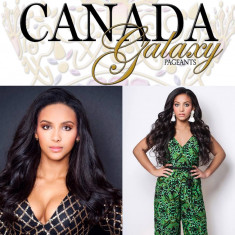 Spotlight on Miss Galaxy Hamilton - Dejah Davis.
Dejah Rose Davis, born in Hamilton, Ontario, was raised with both Bajan and French Canadian values.
Dejah's love for beauty pushed her to pursue a degree in cosmetology, and she graduated with honors. She began her own business called Voo's Visions, where she specializes in lash extensions, as well as airbrush tanning. Education is very important to her, and in the fall she will begin studies towards a career in criminology.
Dejah began competing in pageants at the age of 12. She has traveled all over Canada, and the United States competing in pageants of all styles. She is currently mentoring other young ladies as the Canadian Head Coach for Georgie's Girls Pageant Coaching, and was recently promoted to partner as well.
Dejah has spent many years giving back to her community, and began an organization called "Packed With Love." This mission gives suitcases packed with clothing, shoes, and necessary hygiene items to children and women. Dejah believes in the importance of helping others.