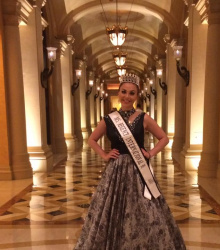 My name is Danni De-Bear and in July 2016 I was crowned Ms. Regency International 2016. I am 24 years old from the south of England. I have a beautiful 15 month old son who makes sure I don't have much spare time. I, along with my mother run a pageant here in the UK, Miss Diamond UK which is being held this weekend (9th April 2017). Pageantry has been my passion for the last 7 years and has given me so much confidence and lifelong friendships.

At the age of 17 my mum entered me in my first pageant due to being bullied throughout my school years for various different things, she wanted me to gain confidence and start  believing in myself again. Through pageantry I have learnt how to not only love myself but to show others girls that they are beautiful too. We are all imperfectly, perfect in our own way.

Since I started competing in pageants I have raised around £10k ($13k) for various charities including a local children's hospice, BEat- an eating disorder charity and our local RNLI - lifeboats.

Winning Ms. Regency International meant that much more to me as it was the first pageant I competed in after having my son so I was feeling a little self conscious about my body as he was only 6 months old, but winning just showed me that things like that don't matter when you work hard, believe in yourself, let your personality shine through and never give up on your dreams.

Having suffered since my teenage years with depression and anxiety - including having a panic attack just before going on stage at regency, it is important to me that everyone knows that despite mental illnesses you can still achieve your dream.

Along with wanting to inspire the younger generations to get involved with their community and charity work, I also want to show that mental illnesses such as depression and anxiety don't have to hold you back.