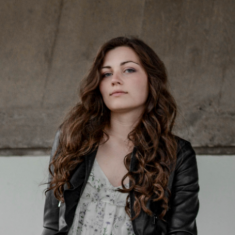 Born into a family of six, Courtney Tarah-Mireille Van Hattem is the 19 year old daughter of randy and Rhonnie Van Hattem; owners of "VanHattem Homes Contracting", and founders/pastors of the tribe Church in Wolfville, NS.


Cori was born to find beauty in the world. Her passion has led her to seek the great potentials in people, and explore the world around her. Since July 20th, 1998 she has chased creativity. At an early age, she was involved in ballet, hip-hop and contemporary dancing. In 2017, Cori's personal love for expression through movement was more solidly developed when she returned to ballroom classes.


Her outgoing spirit became well known when her talent in acting brought her to Off Broadway in New York City, and locally on the TV screen. She has had numerous main roles and awards, including the drama awards, given to one student per year, for grades 10, 11, and 12 in drama classes of Central Kings Rural High School, and Horton High School in the Annapolis Valley, NS.

Cori's creative success is founded not only on paper but also in baking, designing, sewing, and painting. With much variety, she graduated from Horton High School in 2016 at honours level, with the drama award, and an official certificate of Fine Arts.

After high school, Cori had invested into a healthy living and spiritual lifestyle that has provided her with trips to Toronto, Redding California, and Oroville California on an outreach missions trip to fulfill her goal of enhancing the lives of people.

Chasing after her love for people, beauty, and personal identity/character, Cori had decided to begin her education of fashion design, with the intention to promote individuality, beauty, and class. With full intentions to help young girls and older women alike embrace their beauty, and understand how to dress for themselves with dignity and fearlessness.

“I want to raise up powerful, pure, and passionate women that are confident in who they are".

Cori's leadership within her church allows her to be an avid adventurer, consistently using after work hours to design new apparel, and capture quality fashion photographs for friends and family.

Cori cannot wait to extensively bring creativity to the Maritimes, exploring the beautiful world, and encouraging powerful person and identity concepts and mentalities.

The importance of personal identity

What is the Occupation of Cori VanHattem

Aspiring fashion designer making it by as a golf club waitress

I started my first pageant in 2014 to fulfill the dream that I had as a little girl to become a princess, four years later I once again entered the world of royalty to rekindle my love for beauty and confidence in myself.

I love the passion in any genre of music and how it's a reminder that we aren't alone; however nothing compares to my adoration of the warmth of Frank Sinatra and Bing Crosby.