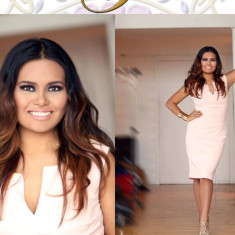 Spotlight on Miss Galaxy Toronto - Christina Andaya.
Christina was born and raised in Etobicoke. Christina is an alumna of Humber College for Police Foundations in 2014. She is concurrently pursuing a degree in Interdisciplinary Social Science and a certificate in Public Policy Analysis at York University. In the future, Christina hopes to pursue a master’s degree in Public Policy or Immigration and a career where she can continue her passion to help others.
Christina has been diagnosed with Multiple Sclerosis and battling it for the past few past years. The symptoms developed overtime, which led her to take the treatment. Christina hopes to spread awareness in hopes to find a cure. Her daily motto is: “Honour, glory & high hopes.”
During her pastime, Christina enjoys watching WWE and Food Network shows on TV with her cat named Cindy. Christina is also one of the Marketing Assistants for the council members of the Filipino Student Association at York University (FSAY). Her role is to promote the club’s events where Filipino culture can be celebrated in an open space that is welcomed to everyone.