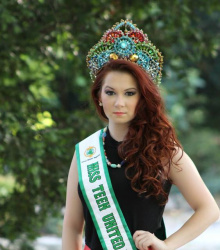 Driven, passionate, “Some superheroes wear a Cape, some wear a crown and heels.” Charitable, Compassionate, Leader. Chelsea believes her talent to be something unique and not seen through many teens within her generation, her talent is being charitable. Being charitable is a talent Chelsea possess through always wanting to make a difference among people in different situations in order to not only better her experience and understand of the world around her, but to also not hold her heart among one charitable organization but to gain improvement and awareness to them all.

If Chelsea could change one thing about herself it would be her height. Big things come in small packages but Chelsea feels as if some underestimated her because of her height being a short 5’1. In ten years, Chelsea see’s herself graduating top of her class in Journalism and Communication at Ryerson University; Ryerson School of Journalism. From there, Chelsea plan’s to establish herself among multiple different Broadcasting companies such at CTV and CBC for their news network. Chelsea see’s herself as a successful woman with her whole life ahead of her to make the changes and accept the challenges in order to obtain the best future possible and fulfill her goals in Journalism.

Chelsea was first introduced into the world of charitable services and volunteering from the young age of thirteen, she first experienced The Downtown Mission, volunteering and being a significant attribute towards her community spoke wonders in her head and ever since, Chelsea have never given up on making a difference. Chelsea held a can drive in order to support the non-profit organization, where all the Mission’s support came from the donations and volunteers dedicated to their community and the people that surround us. Over three hundred cans were collected and over four hundred dollars was collected in order to support her community. Chelsea devoted her life to volunteering among charitable organizations, if she is not at school, Chelsea is at a charity event or volunteering for a cause. Chelsea lives to make a contribution towards her community everyday and the people fighting within it. If not personally asked to participate in an event, Chelsea volunteers her time at any cost. Chelsea finds her events and volunteering opportunities among social media and local papers. Chelsea’s mother has also played a significant role among her involvement due to her academics coming first where as she books Chelsea’s calendar for every cause they can support.

Chelsea’s favorite community project she was apart of was her very own trip to Windsor Regional Hospital in order to donate Easter Gifts to children who wouldn’t be home for the Holidays. Chelsea’s older sister helped comprise of a handmade story book for the Hospital to keep as well as donating her allowances in order to buy toys and stuffed animals for the children within the Hospital.

Chelsea plans to use the title of Miss Teen United Nations 2015 in order to bring more awareness to her platform of Teen Depression and Suicide Awareness. Chelsea suffers from both these disorders and being in the public eye in pertaining to her platform is a dream come true. The Miss Teen United Nations 2015 title will not only bring a bigger awareness of the significance of our teen’s lives, but always help to realize their potential. Chelsea feels as if she is a role model for this platform due to her fight against her never ending battle with depression that led to suicidal thoughts. Also, this title will help Chelsea’s charitable involvement in hopes of gaining more of a teen base volunteer support among our community.

Chelsea believes she would be the best to represent Miss Teen United Nations 2015 due to her charitable services towards fourteen different charitable organizations, her platform of teen depression and suicide awareness, and her passionate heart towards our communities. Being Miss Teen United Nations 2015 opens the door to an never ending possibility of a world-wide public spokesperson presentation in order for our teens to realize their potential and that life will get better. If won the title of Miss Teen United Nations, Chelsea plans to create a public speaking presentation where she hopes to travel to different High School and speak upon her experience suffer from depression and suicide and how helping within her community saved her life.

Chelsea plans to use the title of Miss Teen United Nations 2015 in order to bring more awareness to her platform of Teen Depression and Suicide Awareness. Chelsea suffers from both these disorders and being in the public eye in pertaining to her platform is a dream come true. The Miss Teen United Nations 2015 title will not only bring a bigger awareness of the significance of our teen’s lives, but always help to realize their potential.

Chatting with Chelsea Girard, a multi