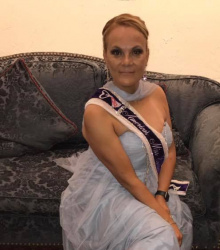 Charlie Alejandro was raised in Cambridge MA. By her single, adoptive mother. She got married very young and earned her GED, her medical assisting certification and graduated from the Metropolitan Police academy. While on the Metro Police she was a drill instructor, court officer and a member of the speakers’ bureau, cultural diversity crisis intervention team, and rape/child abuse investigator. She was the only female on a tactical SOU unit at the time in the state of MA, and one of only 3 in the country. While on the SOU she was an intel officer, search and rescue, hostage negotiator and sharpshooter. With the Metro police, she was awarded the Mateer Lifesaving award, The Department’s Lifesaving award as well as several commendations for her outstanding work in crisis situations and with the SOU team. She attended Bunker Hill Community School at night to complete course work on her Criminal Justice Degree, with a moor in Psychology.

After the consolidation of the Metro Police with Mass. State Police she went on to be an alternate on the STOP team, undercover officer, homicide detective, linguistics expert and registry inspector.

After her retirement from the State Police, she worked as a community organizer for the city of Lowell and was a key speaker on the panel that represented Lowell at the All-America City competition in Philadelphia PA in 1999. Lowell Was one of the winning cities that year.

She was instrumental in starting the Mayor’s youth council to give teens in the city a voice in city government, helping start the Y2K youth talk show, host of the Talk around town access talk show and keynote speaker for UMass Lowell.

While working with the city of Lowell and volunteering in the community she was chairwoman of the Lowell Telecommunications Inc., the Lowell access channel, and was award volunteer of the year in 2000 for her live on air coverage of the Lowell Folk festival.

She was recognized as Lowell’s Woman of the year in 2000, for her contributions to women, at risk youth and the community.

She was award a volunteer award by the Philanthropy foundation, as well as the Women in Action award.

She was the first president of Latinos in Action Inc., an organization committed to assisting people in need to obtain essential services they required.

She was a committee member for the Textile Museum, Middlesex community college, the Mayor’s youth council, the Cambodian Cultural assistance center, and the Enterprise community board of directors.

She was on the board of the Lowell Small business assistance center and was certified as a NIFTE (youth entrepreneurial business certification course) instructor. She won first place for her business idea and model structure at the training seminar.

She was Selected to be Keynote speaker for Texas A&M cultural studies department Annual award ceremony as well as receiving the motivational woman award.

She was selected to represent the City of Lowell at the National Latino Education Institute and was recognized for her work in the community.

In 2010 Mrs. Alejandro moved to Pennsylvania after her daughter in Law Sarah Joy Iraheta, was diagnosed with stage 4 breast cancer.  Sarah passed away in 2012 and left behind a 3 and 1 year old son. Mrs. Alejandro and her Son Eric started the Sarah’s Joy foundation, to honor Sarah’s memory. Since 2013 the Sarah’s Joy Foundation has given away over 22 thousand dollars to those in need.

Mrs. Alejandro entered her first pageant at the age of 47 and won The Mrs. Woman Petite America title and the following year she won the Mrs. woman Petite World title, and has gone on to win 7 different national titles.

Mrs. Alejandro has worked as a stunt performer and got nominated for a SAG award for her work as part of the assemble stunt cast in “Dark Knight Rising”. She has also won an LA Webfest award and an Angel Award as guest writer for “In the Bedroom” web series for the episode “the Anniversary”, and won best assemble cast for “Family Problems” for her role as Detective Helena Maretto.

Mrs. Alejandro was featured on the October 2014 cover of “Imagine” magazine.

Mrs. Alejandro has a blended family of 6 boys and two girls, as well as several “acquired” children who resided with the family at various points in their lives when they were in need. She was 13-year HSA volunteer of St Margaret’s Elementary School (Now Lowell Catholic elementary) as well as running the improve club, being on the Spring auction committee, as well as teaching Junior achievement business classes, and assistant cross country coach.

She also owns and runs “Beantown Statie Production Company, which had its first web series “Testing” nominated for an LA Webfest award. Mrs. Alejandro also co-owns and runs “Cpg-CP Group training and Security with her husband of 23 years, Mel Alejandro.

Mrs. Alejandro was recognized by The Massachusetts Association of Women in Law enforcement for her contribution to the law enforcement community and has just been selected to be on the board of Governors for the National Association of Nonprofit Organization Executives. Mrs. Alejandro is debuting her new talk show in September of 2017 and will be launching a new magazine “The 411” in December of 2017.

Mrs. Alejandro is your current America’s Miss Exemplar Queen 2016, and her platform is the Sarah’s joy foundation, Veterans and Law enforcement in need organizations as well as the Jimmy fund.

The Sarah’s Joy foundation, a non profit started by my son, Eric Iraheta after his first wife, Sarah Joy Iraheta, passed away from Cancer at age 32. We try to assist families and youth in need.

Which School Did Charlie Alejandro Attend?

Lowells Charlie Alejandro, from walking the beat to strutting her stuff.