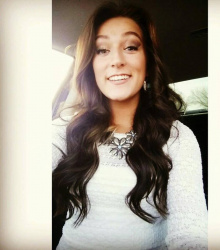 Celeste Yvonne Smith was conceived on January 21, 1997 in Carbon County. As a kid she partook in softball, soccer and karate. She began moving when she was 4, and it rapidly turned into her energy. She took lessons from Linda Johnstuns school of move for a long time before turning into a piece of the Carbon High School Dino Dynamics. As a ninth grader Celeste began playing club volleyball, which she kept on playing through the lay on her secondary school profession.

Celeste cherished having the capacity to partake in not one, but rather two secondary school sports. Appreciating each moment of her opportunity to play for the Carbon Volleyball Team! She played each of the 3 years of secondary school and notwithstanding playing Varsity her lesser and senior year. She was likewise on the Carbon Drill Team every one of the three years, having the capacity to serve as Co Dress Captain as a lesser and Captain as a senior. Being on the Drill Team gave her the chance to perform before a large number of individuals at a REAL soccer match at the Rio Tinto Stadium. She likewise had the chance to take part in Miss Drill Utah throughout the previous two years, increasing awesome experience and making enduring kinships.