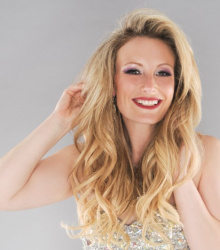 I am the new 2017 Ms Galaxy UK competing in the Galaxy international finals this July in Orlando Florida. I am 34 years old, an Equestrian Coach specialising in Children and a beef farmer! I also work part time in the care arm of a housing company helping homeless people.

With my title I am working on deveral prijects: I am a coach by trade and have moved over into Primary schools sports coaching. I am keen to deliver the message of what sports participation can gain for the child both physical health and mental health;
I'm shocked to find out that my old primary school does not have sport on the curriculum! This is now very common in the UK!
I am finalizing plans to work as Ms Galaxy UK with Activate and the local Doctors on promoting sports participation in schools for health and life skills reasons.
I also work in a company that helps the homeless, or people at risk of such. I am working with the company as Ms Galaxy UK to volentarily help in other areas. This is a national company and there could be some volunteer/appearance work for pageant girls all over the country!
I am also working with the UK national charity Little Hearts Matters;
This charity offers help to anyone affected by the diagnosis of single ventricle heart condition....essentially children born with half a heart.

I first got involved in Pageantry when I was 23! Miss Cornwall ( wjere i am from in the UK) was sponsored by our biggest newspaper;
The Cornish Guardian back then and so it was everywhere. It took me two years to pluck up enough courage to enter; That was 2005.
I went on to win the title of Miss County Of Cornwall (which was a different system) and represented in the 2006 Miss England. It was 9 years before I entered another pageant again! And two years later I won Ms Galaxy UK!

Within the world of pageantry, there is always a conflict of opinions. This is what happened between Ms. Galaxy UK and her director, resulting in her handing over her title four months early. (Read: Miss World Bangladesh Stripped Of Crown)

Galaxy UK is held in March at the Park Hall hotel in Preston. The finals are over four days due to the amount of entries in the UK. Last year, we saw Celena Wolfe crowned Ms. Galaxy UK. She later went on to compete at Galaxy Internationals where she picked up Best in Fashion Wear and first runner-up.

The feud began when Wolfe commented on a social media post regarding the recent Miss Earth results. Various posts were made commenting that the results may have been fixed. Wolfe responded with a comment stating, "International pageants have to make practical strategic business decisions just like any big business." (Read: What Should You Post On Social Media As A Titleholder)

The comment was forwarded to the UK director, Holly Pirrie, who was disappointed and frustrated by the post. Wolfe apologized for her comment and asked how she can rectify the problem at hand, but she was dismissed as the damage was already done. This then lead to a heated discussion between Wolfe and Pirrie. (Read: 5 Pageant Director Pet Peeves)

Your individualality makes YOU beautiful #breakthebox All of my life people have put me in a box, or tried too; I never really quite squeezed in though! As a child I found it difficult, frustrating and well....I was never that popular. I could never mold myself to what peer pressure expected of me; Now it's my strength, my talent, what makes me special and unique and I say to all: Break out of that box, smash that pigeon hole! Be you in all your glory! It's your power! It's your beauty! I am a horsey girl, a farmer, normally smelling of something strange and 90% of the time without a scrap of makeup on. And yes, I can scrub up and deliver my message on a Beauty Pageant stage! Don’t listen to what you think others want or expect you to too. Never be scared to reach for your dreams however big or small they are.

Which School Did Celena Wolfe Attend?