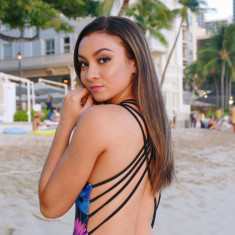 Aloha my name is Ashley Hill and I am the current Miss Waikiki Teen USA 2018. I am 18 years old and a fulltime student Chaminade University of Honolulu getting my bachelors in elementary education. Some of my hobbies include watching football, thrift store shopping, going around the island trying new sweets and performing arts. I am actually currently in a performing arts group called The Pacific Academy of Performing Arts.

My platform is dealing with the lack or removal of The Arts with in schools, elementary schools to be more specific.

What is the Occupation of Ashley Hill

Which School Did Ashley Hill Attend?

Pageants were something that sort of snuck up on me. A mom in my performing arts group actually mentioned how she was going to be directing a prelim that summer and asked if I wanted to join. I was hesitant at first, but threw caution to the wind and went for it and ended having so much fun. I ended up winning the title of Miss Honolulu Teen USA 2017 and went on to compete in the Miss Hawaii Teen USA state pageant. All of this happened last year, and ever since then I have wanted to compete again and just improve and make my parents and family proud.

Have performed in 2 parades in both Disneyland and Disney World.I graduated high school with 12 college credits. I have done about 13 musicals, one of my favorite shows I have done was the Wizard of Oz as the character Dorothy. I was also awarded the Presidential scholarship, worth about $36,000 from Chaminade University.

What is the Nationality of Ashley Hill