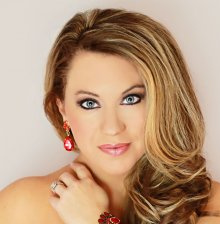 Born c. 1981 in Memphis, Tennessee. Singer, songwriter, & musician April Michelle was just 12 years old when she first performed on the Grand Ole Opry and a short time later was cast the part as Minnie Pearl in the made for TV movie “Big Dreams & Broken Hearts: The Dottie West Story”. April was raised in Paris, Tennessee, the home of Hank Williams, Jr. & her mentor Merle Kilgore. Merle started teaching April the ropes of the music business when she was just a little girl. As a teenager she was performing on Broadway & in the bar scene. April was doing morning shows at The Nashville Nightlife & night shows at The Nashville Palace. She recorded her first single “Little Bitty Tear” at 16 years old with Hank Cochran & Sony Records. April was just 18 years old when she took to the road as a musician & back-up singer working with and opening for many artists including Jason Aldean. At 30 years old she has become a very well respected vocalist/songwriter in the music industry having worked with some of country music’s most well known artists & producers. These days April spends her musical time doing studio work & songwriting in Muscle Shoals, Alabama. For over 5 years, she & other shoals musicians donate their time to playing the Saddle Up For St. Jude concert every July in Tuscumbia, AL. In doing this, April has helped raise over $1,000,000.00 for St. Jude!!! This is a cause very near and dear to her heart! In January, April was crowned Mrs. Alabama International 2015, and will spend her year as an official Ambassador for St. Jude Children's Research Hospital. She will compete for the title of Mrs. International in July.

As a parent you never want to be faced with the possibility of your child having Cancer. I somewhat know now what it feels like to walk in those very scary shoes! At just 4 months old, we discovered our daughter had a tumor near her eye.Thankfully, EmmyLou's tumor was found to be benign, but I can't imagine how our world would've changed if it had been Cancer. I do know without a shadow of a doubt, that either way, St. Jude was the only place I would've trusted to care for my little girl! Now, as an Official St. Jude Children’s Research Hospital Ambassador, I’ve partnered with the ALSAC who utilizes me as a spokesperson educating the public about the hospitals purpose and needs as well as its importance. I created the St. Jude STRONG program to assist St. Jude patients after treatment in building a platform from their experience &amp; forming their own fundraisers to give back to the very place that saved their lives! The St. Jude International Outreach Program allows me to reach far beyond AL. &amp; TN., taking the “St. Jude Strong” program WORLDWIDE! It's important to remember that at some point most people can say their children didn't have Cancer....but you can't say they will never have Cancer. "Finding Cures. Saving Children."