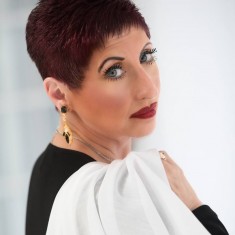 Angela is no stranger to the Talent, Model and Entertainment Industry. Having studied music from age 5, Angela is an accomplished Singer and Dancer. Angela took part in the Reader's Digest European Vocal Tour and was named, "Female Vocalist of the Year". Angela has studied with the finest teachers in the industry with regards to her dance and vocal abilities. Angela started her dance instruction with the Jan Le Winter Cultural Arts Center, where she studied Ballet and Jazz. She later went on to join the Carol Naso Dance Troupe, who was also the dance coordinator for the Miss America Contestants. Under Ms. Naso's guidance, Angela furthered her studies in Tap and Jazz, along with instruction in Musical Comedy. Recently, Angela had the distinct pleasure of studying ballroom dancing with Maksim Chmerkovskiy, from "Dancing with the Stars" and owner of Dance with Me.

Currently, Angela is the Fashion Show Coordinator and Chair person for the 100 Successful Women in Business Fashion Show, produced by the Global Trade Chamber.

What is the Occupation of Angela Posillico

Which School Did Angela Posillico Attend?

I started competing in pageant as I felt this was a way to empower women of all ages, and to give back to the community.

Love to dance and workout!