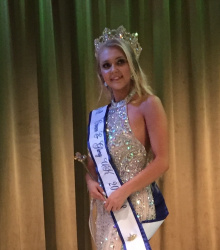 Amy won my first title Miss Teen National Treasure at the age of 14. Due to the system changing the date of the finals the  following year she didn't had her title over until she was 16.
In September 2016 Amy took to the stage again to compete for the title of Teen Crown & Glory Scotland which she won and also went on to win the overall title in July 2017 and is now Teen Crown & Glory United Kingdom.

With her title she has traveled all over the UK, Ireland and Paris to promote her title and charity platform.