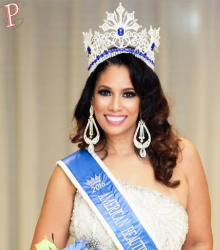 Message Claim This Profile Edit Information
Janice Celeste is a former commercial model and magazine publisher. She is the mother of three daughters, including supermodel Sessilee Lopez and is the author of the book, "Making  A Supermodel" available on Amazon. Janice has appeared on CNN, CNBC, and  has been profiled in USA Today. She is currently the 2016 American Beauties National Elite queen. Her platform is "Connecting Pets With People" and she does this via her work with service dogs as well as raise money via her doggie pageant on Facebook, DIVA Dog Pageants.

Her pageant journey started many years ago when she was a semi-finalist in the Mrs. Pennsylvania America Pageant. Janice stated that it was one of the best weekends of her life but it would be almost a decade before she would compete again. Her motivation this time was to lose 70lbs and to help make the world better for the innocent, which includes children and animals. Janice lost the weight and became healthier. She went on to compete in the Mrs. New Jersey America Pageant and was a runner up and then on to compete in the Mrs. United States Pageant as Mrs. New Jersey United States 2015.

Janice now resides in Palm Coast, Florida with her husband, Mike and little dog, Gigi. You can follow Janice on Instagram @JaniceCeleste and on Facebook at Facebook.com/MsFLABNI.
No record found!
No record found!

Fitting into a swimsuit

"Connecting Pets With People" Janice assists others with keeping their animals out of shelters, helping to raise money for pets' healthcare and connecting needy people with service animals. You can find out more about DIVA Dog Pageants at Facebook.com/DivaDogPageants.

Which School Did Janice Celeste Attend?