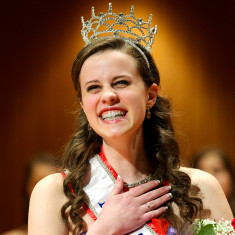 There will even be a special guest this year, The Pageant Planet’s own, Steven Roddy. He will be emceeing the finals night alongside Miss Teen of America Executive Director, Becky Thoreson.

“My favorite experience was traveling to Washington DC and lobbying on Capitol Hill for Special Olympics,” Hayes said. “I loved having the opportunity to promote and support a fantastic organization."

Hayes, Corey from Special Olympics, and Iowa Congressman David Young at the Capitol. Photo courtesy of the Miss Teen of America Facebook page.

Hayes continued, "It was a once in a life time opportunity to meet and talk to my state representatives and senators firsthand about social inclusion.”

Miss Teen of America encourages, and even provides resources for, their delegates to promote social inclusion in their communities. Special Olympics is one of the organizations they partner with.

Hayes at her Inclusion Event with Special Olympics. Photo courtesy of Corrie Hayes.

“Another favorite is also related to Special Olympics,” Hayes said. “I was able to host an inclusion event with a school club I founded called SMILE. It was such a fun day filled with games and laughter.”

Hayes did get to take some time for herself during her reign to celebrate her accomplishments.

Hayes and the Miss Teen of America team at the entrance of DisneyWorld. Photo courtesy of Corrie Hayes.

“Also at the top of my list is my prize package trip to Orlando, Florida,” Hayes explained. “I got to go to Disney World and pick out a designer gown at Regalia Gowns. It was such a great time to bond with MTOA's Owner and CEO, Sarah Bazey.”

Appearances are important to growing a new system and promoting a title. For singers, a popular appearance is singing the national anthem. While this is often done in sports venues, there are other arenas in which an anthem singer is needed.

Miss Teen of America 2015-2016, Corrie Hayes, at the top of the Iowa state Capitol Building. Photo Courtesy of Corrie Hayes.

“I have also been given the opportunity to sing the national anthem at many different locations around the country,” Hayes said. “My favorite was singing at the Iowa State Capital for the House of Representatives. Afterward, I also got to climb to the very top of the dome! It was truly an amazing experience.”

Miss Teen of America wants to see the accomplishments, community service and school involvement of their delegates. They even have a written test as part of the competition.

“It is a written, general awareness test that gauges their familiarity in all sorts of topics relevant to American teens today,” explained Paige Jensen, Miss Teen of America’s Social Media Coordinator.

They promote well-rounded inner beauty over a focus on outer beauty at their pageant. As a result, titleholders get to use this focus to empower those they meet throughout their reign. (Read: What Makes Miss Teen of America Different?)

Hayes speaking to some school children during an appearance. Photo courtesy of Corrie Hayes.

“Lastly, but certainly not least, I loved all the different opportunities I have been given to speak about inner beauty,” Hayes explained. “I have done this by reading books to kindergarteners, being a guest speaker at a tea party, and talking about fashion to high schoolers. This is so very important to me and who I am. I love sharing this truth with others.”