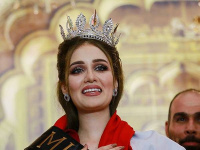 The second Miss Iraq since 1972 has just been stripped of her crown due to an alleged contract violation resulting from failing to disclose her proper martial status. (Read: How to be Sure You're Eligible for a Pageant With a Contract)

About the violation of the contract

In March of 2017, Vian Amer Noori Sulaimani won the Miss Iraq title and during registration, she conveyed to organizers that she was connected to a serious relationship that had ended. While the rules of the organization do not prohibit a contestant from being engaged or entering into a serious relationship, they do require contestants to "never be married in any form whether religious or civil and have not given birth to a child."

After Sulaimani had won the title, pageant organizers found out that she had been involved in a previous marriage and that marriage had since dissolved. The news of her prior relationship indicated that she had broken her contract as a titleholder and would be removed from the organization.

The Miss Iraq Facebook released an official statement that reads, "While Ms. Sulaimani told us during the registration that she was engaged in a botched break, she was in fact, connected to a marriage and is now separated or divorced."

The press release went on to say, "As an organization aimed at promoting an international level of beauty and elegance, we are saddened by the events and pledge to organize what is best next year and with regard to the title of this year will remain abstract until the selection of an appropriate contestant representing Iraq in international competitions for 2017."

This could mean that 1st Runner-up Masty Hama Adel will step up as Miss Iraq 2017 and fulfill all of the duties of that title. The 18-year-old would represent Iraq at all international pageants this upcoming year. The press release was not clear as to whether Adel would be selected as the next titleholder or when that decision would be made. (Read: How to Best Utilize an Appointed Title)

The former queen did not take this news without objection and posted publicly about her plans to address the decision. She posted to Instagram that her title was taken from her for "immoral reasons and abject business designs." She further added that she intends to take legal action against the organization. She alleges that she told pageant organizers about her engagement to an Iraqi-born Irish citizen, which has since dissolved. (Read: What Should You Post on Social Media as a Titleholder)

There has been no further word on if the organization plans to respond to legal action taken by Sulaimani or when the next Miss Iraq will be announced.