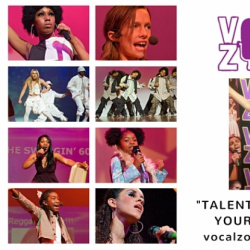 Coach
Audrey Beharie would like to welcome you to VOCAL ZONES USA! There are many organizations out there promising the young, talented and not so talented their big break into the music industry. But there are not many that are driven by a desire to invest in
Nominate For Best Pageant Coach

Audrey Beharie is a former "Miss Afro West-Indies" National Pageant Titleholder and an ex-model who trained at the London Academy of Modeling, in London, UK by renowned celebrity modeling coach, writer and body language expert, Judi James, who has trained some of the big names in the industry including the likes of supermodel, Naomi Campbell.

Having also worked as a Promotions Coordinator at MCA where she worked intimately with some of the most prolific international artist on their roster, Audrey has an incredible insight into the business.

Audrey is also an accomplished singer/songwriter/producers who was signed by PWL Records (the label responsible for Kylie Minogue, Jason Donavon, Rick Ashley, Bananarama to name just a few) and then signed to a major recording contract at Polydor Records. After this, Audrey went to work at the private London offices of Sir Paul McCartney and the late Linda McCartney and later formed her own production company - B.R.E. Productions, record label - Inner City Groove Records and recording studio - Hourglass Studios in London, UK as well as her own company here in the USA - B.R.E. Productions International, Inc which is the home of the MISS TEEN DREAM USA PAGEANT SYSTEM, FASHION 4WARDZ and PHOTOGRAPHY BY BRIAN McGEE

Audrey was able to acquire invaluable wealth of information about the industry and eventually went on to own her recording studio, production company and label where she developed and nurtured young people in all aspects of songwriting, production and studio skill in the quest to create and revive the excellence of good songwriting.

By bringing personal enhancement goals and skills using strong moral values, giving each young person a sense of pride, achievement and belonging. She explained her mission. “It’s about enabling each person to realize their potential. God gave us a talent and I have been blessed and inspired to be able to create Vocal Zones to unlock their true worth. These talented individuals feel invigorated by the sense of control and discipline in their lives and become more confident in the world around them and what it has to offer – whether or not it is the form of performing arts or just as a tool to help with their personal development”.

Audrey says "With over 3 decades in the business, I very strongly believe that people in my position who have experienced the business with its highs and lows should all do whatever we can to put something back into the industry that, often than not, can be accused of negatively exploiting young talent and, therefore, give the industry a bad name. And, by mentoring, coaching and providing a positive positive platform, we have been able to successfully give young artists the realization of their full potential and support them with focusing on their overall improvement and advancement in the world of music, dance and drama. By doing so, we could really contribute and make a positive effort towards making a difference in the life of a performer in a positive and tangible way"

Her faith is not only driving her but also the large number of students and performers that have taken part in Vocal Zones over the years. Many have gone on to successful careers in the industry as artists, songwriters, producers, TV acting work, acceptance into some of the UK’s most prolific performing arts schools and performing in some of London’s finest West End stage productions including “Cats”, “Lion King”, Chitty Chitty Bang Bang”, “Annie Get Your Gun” among others have gone ahead to be signed to major recording contracts, publishing and management deals, received full scholarships to top performing arts academies and have appeared on TV, the Theater and all performing arts avenues. All these artiste have attributed their success to being involved in the VOCAL ZONES program.

Audrey’s devotion to music is unquestionable “I’ve been loving music, singing and dancing since a little girl of about 6 years old – prancing about the bedroom with a hairbrush in my hands and tapping out drum patterns on the dining room table! I simply feel that I was born to do it – It’s my Purpose and it’s great to be doing something that you love and are able to share that enjoyment with others! What a blessing!”

However, she is very quick to remind her students to have something to fall back on. “If you have talent it never disappears but with education and faith on your side, it will be able to give you that mental edge and spiritual discernment to be able to recognize pitfalls if and when they present themselves”.

Audrey’s advice is a simple one! "Be persistent and determined. See a vision and stick to it. Be practical, go after your dream but stay on the narrow road. There’s no easy way - every easy path has got its consequence at the end of it.”

We sincerely thank you for dropping by and look forward to working with you to bring out that MAGIC in you too!