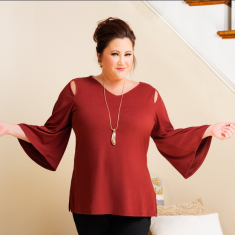 Allisyn Hardee Lambes is a master communicator. She has spent 20+ years performing, competing, judging and emceeing pageants all over the United States. Allisyn was Mrs. Kennesaw in 1997. Allisyn’s expertise is interview preparation and on-stage presence. She currently owns and operates The Pageant Place where she coaches over 150 girls nationwide. Her passion is coaching girls and women of all ages to find the greatness in each girl and help them become a winner. Allisyn recently co-starred on Lifetime’s hit reality show “Kim of Queens” where she coached alongside her sister, Kim and mother, Jo. She has appeared on HLN (Headline News Network), The Steve Harvey Show and various radio talk shows around the country. Allisyn was recently named as The Brand Ambassador for Belle by Kim Gravel exclusive on QVC. Allisyn resides in Loganville, GA with her husband Sean, her sons Brooks and Brantley, and step daughter, Haley. Allisyn is passionate about being a wife, mom, pageant coach and most of all JESUS lover!

Coach Al has really done amazing work with my daughter. We have coached with her a little over a year now and now my daughter is able to speak an intro, do interview and walk on stage all by herself at 3 years old. Coach Al not only does amazing coaching but she also prays for the girls and treats them like her own! She is truly a blessing and we love her so much.

Allison’s personality really brought my daughter out of her shell. Her energy and love that she has for her clients is amazing. We really feel very supported by her. ??

Coach Allisyn has taught me more than just how to walk on a pageant stage. She has taught me what true confidence is and has show me that my struggles do not define who I am. I have been coaching with Allisyn for four years now and I can confidently say that I would not be where I am today without her guidance. -Kamryn Noelle Jaugstetter

There is nothing bad to say! She loves all her kids like her own, pushes them to greatness, and is just a fun person! We love Coach Al!

Allysin is the best! She has given my daughter the confidence to do more than pageants! She kind, smart and a great communicator. She has become a member of our family!

Is the Kim. i really want do a pageant. I think it will really help me.

I've always needed help on my walks and stuff but I think that Kim, Allisyn, And Jo can help slot with that??

There aren’t enough stars for rating Allisyn! In my book, she deserves far more than a 5 star rating! There aren’t enough words to express what she means to us! From the moment we met her, she felt like family. The lessons, the confidence, the poise, the grace she has taught my girls is such a huge part of who they are. For my youngest daughter, walking the stage and looking like a natural has not come easy to her. She is on the autism spectrum and some things, like pageantry, take a lot of work. Allisyn has given her a love of pageantry. It has done so much for her, for our family. I could not thank her enough for being such a powerful, positive influence in the lives of my children. Allisyn loves with all her heart and believes in her girls with all her heart. My youngest daughter has said “Coach Allisyn is my second mommy”. She means the world to us and we are so thankful for her!

Allisyn is AMAZING! Her personality and energy is contagious. She genuinely cares for her students and she is passionate about her work. We are glad that we chose Allisyn to be our coach!

Allisyn has made one of my first pageant experiences so fun and enjoyable. She is always full of energy and tells it like it is!! I've learned so much from her, and she offers amazing insight on things I would've never thought of. She's so great at pulling out what makes ME stand out. She is so supportive, caring, knowledgable, and honest, and I'm so grateful to have met her!!!

You’re the best coach ever! Love you sweet friend. ????

Allisyn Hardee Lambes is the most loving, positive, caring, REAL, inspirational and encouraging coaches/people I’ve ever met. The girl has never met a stranger! All of students love her and will do anything for her. She’s scary honest and doesn’t hold back. She makes you want to be a better YOU. She’s always there to support you and is there for the long haul. If you ever meet her you know what I’m talking about. She draws you in with her magnetic personality and captures your trust. This is one unique and amazing lady, coach, person, friend, wife, sister, and daughter and truly deserved the honor of being the 2019 Coach if the Year.

My daughter has been a Pageant Place client for many years and has won state & national titles as a result of collaborating with Allisyn. Her teaching goes beyond how to compete in pageants to how to live life & I believe that is the key to her success. Allisyn is more than a coach, she has become family & we treasure our relationship with her!

Allisyn is amazing! I swear, she is incredible with my unreachable 4 year old strong willed child!! She also coaches my 11 year old. It's amazing how she is really able to individualize what each girl needs to be her best and bring out her personality. She is professional, personal, faithful, and knowledgable about the industry. She has a passion for helping women, bottom line! I cant ppssibkybsay enough about what an incredible person and coach she is!

Allisyn is one of the sweetest ladies I know. She is coaching 2 of my friend's daughters. She is very professional. She really and truly cares about each girl that she works with. She is a loving mother, sister, aunt, coach and friend. She is a great role model for young girls to look up to.

Allisyn Lambes is by far the best coach in the pageant world! She has an ability to connect with young women and children and not only show them the beauty they have inside of them but the beauty they can bring to this world. She’s not only a pageant coach but a life coach. She prepares women and young girls for a life filled with sisterhood, positivity, and success. She is a fantastic and godly person who sees the best in everyone. She’s truly got a gift!